Broadcasting on different radio frequencies defines the characteristics of AM, FM and DAB+ transmissions. Whilst AM uses the longer wavelengths in the medium wave bands allowing the signal to travel further, the band suffers from interference, particularly in dense urban environments. FM broadcasts on VHF Band II (88-108MHz), a higher frequency offering improved sound quality to AM, the band is subject to multi-path interference and is congested so it limits the ability for radio to expand or offer new features and functionality.

DAB+ Radios use a far more advanced and technically robust transmission system and operates in Australia in VHF Band III 174-230MHz. Like other digital technologies, it uses higher frequencies which work extremely well within the coverage area but have a “cliff edge” drop off at the boundary of reception.

DAB+ is both cost effective and spectrum efficient technology, allowing broadcasters to offer their popular analogue stations simulcast in digital quality, and significant choice from new DAB+ only station formats such as kids, dance, sport, urban, hard and heavy, chill and smooth. DAB+ uses a robust modulation which is designed for radio reception in mobile environments, such as vehicles and public transport.

DAB+ radio offers many features and benefits, enhancing the experience for radio listeners. 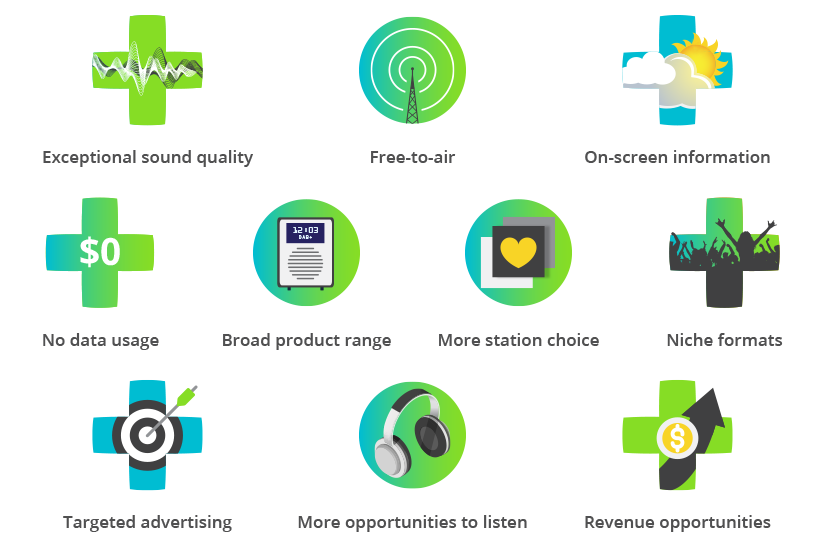 There are more than 230 DAB+ radio enabled devices on the market. These can be purchased from leading retailers in-store and online.